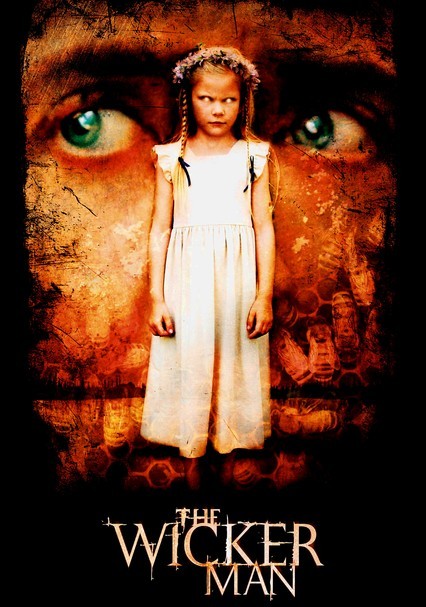 2006 UR 1h 42m Blu-ray / DVD
In this remake of the 1973 thriller, cop Edward Malus gets more than he bargained for when he looks into a girl's disappearance. The search takes him to a Pacific Northwest island, where a string of ominous clues leads him to a stunning conclusion.

Parents need to know that the plot sets up an agrarian cult of women who sacrifice humans and animals to a "fertility goddess." The eventual sacrifice is harrowing, as the victim is dragged, beaten, tied up, and burned to death (this scene is potentially scary for kids, as it uses sounds and blackouts). The film begins with a violent accident, in which a car with a mother and child inside is slammed by a truck and catches fire; this scene repeats as the witness/cop suffers flashbacks throughout the film. Island women menace the cop, who responds by pulling his gun and eventually fighting them physically. The cop discovers a dead body with bloody eyes (in close-up). Several tense scenes and arguments. One f-word; assorted other profanities.

Car smashed by a truck in front of Edward, then bursts into flames (he sees versions of this trauma repeatedly, as flashbacks); Edward finds a bloodied corpse; Edward pulls his gun on a girl to get her bike; Edward is allergic to bees and attacked by a swarm, leaving him swollen, unconscious, near dead; Edward fights with several women near end, kicking and slamming them into walls and to the floor; Edward is beset by a swarm of women, bloodied, beaten, and tied up; Edward is set on fire (by a little girl) and screams as he burns to death (from a distance, his figure is recognizable).

Women in cult appear to subjugate "their" men and set up Edward for human sacrifice; Edward tries to "help people," but ends up easily fooled by ex-fiancée.