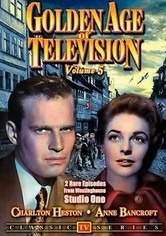 1950 NR 2h 2m DVD
Oscar winners Charlton Heston and Anne Bancroft star in this pair of World War II–themed episodes from the "Studio One" anthology TV series, which ran from 1948 to '58. In "The Willow Cabin," Heston plays a British surgeon whose liaison with an actress becomes complicated when war breaks out. "Wintertime" centers on a sea captain who returns to his home in postwar Germany, where he helps a Latvian refugee (Bancroft) hide from the Russians.