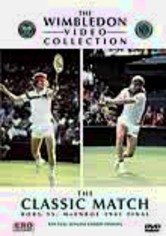 2004 NR 3h 30m DVD
Two tennis legends reprise their historic match-up of the previous year on tennis's hallowed grass court in the 1981 Wimbledon championship. Having lost the 1980 finals to Swedish master Bjorn Borg, the fiercely competitive John McEnroe is determined to take away with the trophy; what transpires can easily be described as some of the best tennis ever seen, played out in four long sets before the eventual winner was determined.