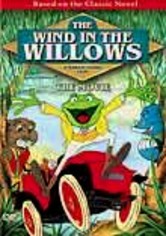 1996 NR 1h 11m DVD
Join the mischievous Mr. Toad and his friends Mole, Ratty and Badger on a wild ride in this animated retelling of Kenneth Grahame's classic novel. Speed-demon Mr. Toad almost crashes into the river, and his escapades eventually land him in jail. As Toad plots his escape, his friends Mole, Ratty and Badger must try to run invading stoats and weasels out of Toad's magnificent mansion. This animated version won the 1999 Parents' Choice Silver Award.