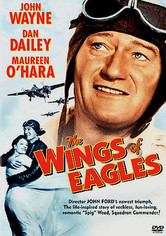 1957 NR 1h 50m DVD
Oscar-winning director John Ford helms this high-flying biopic of World War I-era Cmdr. Frank "Spig" Wead (John Wayne), a pilot who became a screenwriter when a serious injury grounded his career. In one interesting twist, the real-life Wead was actually a good friend of Ford's and wrote the script for his WWII picture They Were Expendable (1945). In another, Ward Bond co-stars as a filmmaker who is based on the real-life Ford.