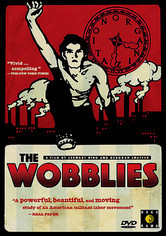 1979 NR 1h 30m DVD
This fascinating documentary explores the group that won an eight-hour workday and fair wages in the early 20th century. Founded in 1905, the Industrial Workers of the World, aka the Wobblies, changed the course of history as they attempted to organize unskilled workers into one overarching union. Replete with striking archival footage, the film pays tribute to American workers who put their lives on the line to battle rampant corporate greed.