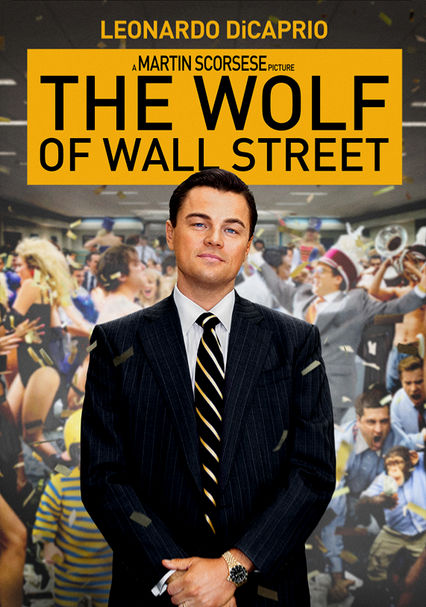 2013 R 2h 59m Blu-ray / DVD
Martin Scorcese's high-rolling Wall Street drama is based on the memoirs of stockbroker Jordan Belfort, whose giddy career -- involving audacious scams and confrontations with the FBI and other agencies -- ended in federal prison.

Parents need to know that The Wolf of Wall Street is based on the true story of a financial broker who bent the rules, became enormously wealthy, and was not caught for years. He lives a life of debauchery and excess, cheating on his wife, remarrying, and cheating on his new wife with an endless array of prostitutes. Many characters are shown having graphic sex of all types. The main character uses every kind of drug under the sun, but especially prefers Quaaludes; the movie spends extra time on the effects of this drug. A secondary character is also a heavy drug user. Language is very strong and constant, with "f--k" uttered nearly constantly, as well as almost every other vulgar word in the book. As for violence, there's mostly enraged shouting, but there's a bloody face-bashing scene, some domestic violence where a wife gets punched a couple of times, and a quick shot of a (very tangential) bloody suicide. The legendary Martin Scorsese's the director, and most movie buffs will want to see this, but as with GoodFellas and Casino, this one's not recommended for kids of any age.

There's a terrifying storm at sea that nearly capsizes a yacht. Characters fight amongst themselves quite often, with enraged screaming and yelling, and occasional hitting. There's an interrogation scene in which a character's bashed in the face, followed by sprays of blood. In the opening scene, traders play a cruel game in which they toss dwarves at a big target. A major character chokes and stops breathing for a moment but is rescued.

Language is very strong and constant, mostly involving "f--k" and all permutations, but also "s--t," "c--t," "c--k," and just about every other obscene word imaginable. Also anti-gay slurs.

The character reaps untold riches from illegal activities and has a general contempt for anyone else he deems not smart enough to figure out such brilliant schemes. He's eventually caught, but he doesn't seem to learn any lessons. Indeed, he begins to make a living as a motivational speaker, teaching more people how to be like him. Ultimately, the movie makes a point that excessive desire can never be quenched and can lead down a dark path.

A white Lamborghini plays a part in the movie. The Steve Madden shoe company figures in the plot. Absolut vodka, Mercedes-Benz, and Armani suits are mentioned.

The main character's a drug addict. He's seen drinking alcohol to excess, snorting cocaine, and taking all kinds of pills, but extra time's spent on his favorite: Quaaludes. The movie describes the effect of taking Quaaludes, and one sequence is dedicated to a memorable night in which he takes an extra-strong dose. The character's closest friend is also a heavy drug user. Cigarette smoking is shown, as well. At the end of the movie, it's suggested that he's cleaned up and become sober.