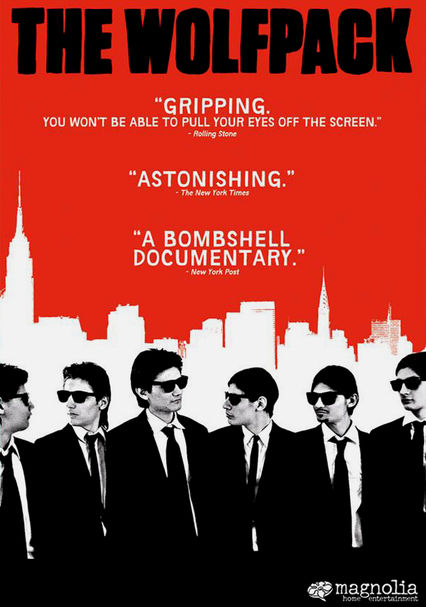 2015 R 1h 29m Blu-ray / DVD
The six Angulo brothers have spent their lives locked away in a Manhattan apartment. All they know of the world is gleaned from films they watch obsessively and recreate. A fascinating coming of age story and true example of the power of movies.

Parents need to know that The Wolfpack is a documentary about siblings who were kept inside a New York City apartment for nearly their entire lives, watching movies as their primary window to the world and re-enacting them as a means of creative expression. There's some strong language, mainly in repeated dialogue from the films of Quentin Tarantino and Martin Scorsese. These play-acting moments also contain some implied violence (fake guns, fake fighting, etc.). It's implied that the siblings' father (the one responsible for the apartment lockdown) drinks, and there are some flashbacks to the parents' courtship. Despite the unusual situation it captures, ultimately, this is a positive, warm, human documentary, so teens -- especially movie buffs -- may be drawn to it.

Brief images of a mother and father during courtship, showing affection.

Strong language, including "f--k" and "s--t," borrowed from movies by Quentin Tarantino and Martin Scorsese.

A testament to the power of creativity -- not only for an escape, but also for spiritual nourishment. Also offers a way to approach the argument that "those who would sacrifice freedom for safety deserve neither freedom nor safety." The father kept his children safe from crime on the streets, but at what cost?

Many famous movies are referenced, but it's not product placement.

Implication that the father may be a heavy drinker.