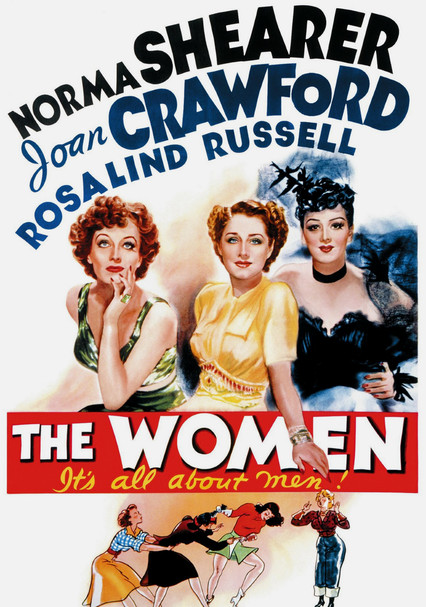 1939 NR 2h 12m DVD
George Cukor directs an all-female cast in this catty tale about battling and bonding between friends and enemies that was edgy for its time -- and is considered the ultimate women's movie of the 1930s. Norma Shearer, Joan Crawford, Rosalind Russell and other Hollywood leading ladies are among the array of husband-snatchers, snitches and lovelorn ladies who argue and gossip about each other at astonishing breakneck speed.

Parents need to know that this old-fashioned comedy will be appreciated most by filmgoers who delight in the culture, charm, and artistry of old movies. It will not be of interest to most younger kids. Divorce is a core plot device and a young child is shown terribly upset at the prospect of her parents separating. As was typical in 1939, the few visible African-American women are portrayed only as servants. With one exception (a self-professed "old maid writer"), the women at the center of the story have neither careers nor involvement in any activities other than gossiping, shopping, visiting beauty salons, and witty repartee. They're either wealthy, indulged, and defined by their husbands, or they're predators, on the lookout for rich men to marry.

Philandering husband is referred to as "stepping out" on wife; woman seen in bubble bath, no nudity.

Two dogs growl and bare teeth at each other in opening scene.

Some of the women are gossipy, selfish, back-stabbing, and seem to enjoy their "friends" being hurt. This behavior is meant to get laughs. Most misconduct is shown to have consequences. African-American women are depicted only as servants.

Many of the female characters smoke cigarettes throughout the movie; this was common in 1939. Champagne consumed in moderation within a few scenes, whiskey in one other.