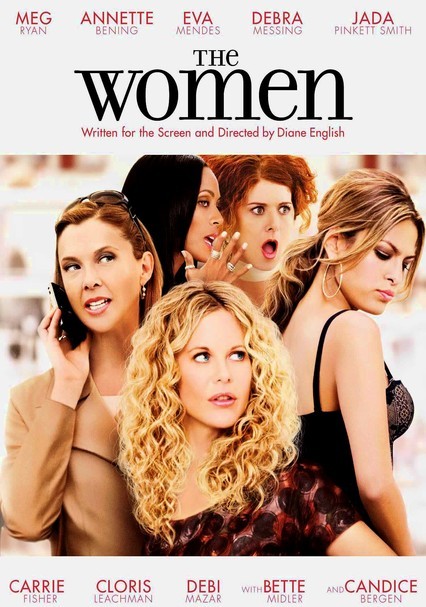 2008 PG-13 1h 54m Blu-ray / DVD
Shocked by the discovery that their friend's husband is having an affair with a beautiful young shop girl, a tight-knit circle of New York City socialites comes up with a devious plan to help their chum win back her man.

Parents need to know that although the content of this dramedy is actually on the tame side -- there's a little bit of swearing, drinking, and smoking, and some sex talk, but no outright nudity -- it deals with mature themes, including infidelity and betrayal. One of the casualties of adult characters' marital discord is their child, a painful issue that's handled with a certain flippancy that might be confusing for younger viewers, especially given that the tween in question appears to be truly struggling over her parents' problems. Also expect lots of shopping and label-dropping -- and more than a few jokes about already-thin women and girls needing to lose weight.

Some parading in lingerie; a woman lounges in a bubble bath; some frank talk about how to pleasure men in bed and about lesbian relationships.

Two women confront each other; some screaming and yelling.

A man cheats on his wife, though the act isn't shown, just alluded to. A woman makes no apologies for going after a married man. Another woman gossips about other people's affairs. A woman sells out her best friend to save her own job. A mother neglects her daughter in her grief over her breakup. A grown-up finds out that a tween is cutting classes and smoking cigarettes. A teen obsesses about her weight and people just laugh and dismiss her worries.

Reads like a Saks Fifth Avenue catalog from the first five minutes onward. The store itself figures prominently, as do many of its wares; visible labels include Chanel, Burberry, etc. Also mentions of Grey Goose, Federal Express, Prada, and more.

Two women share a joint. Some drinking, mostly in social situations. A teen admits to smoking and flashes a pack of cigarettes.