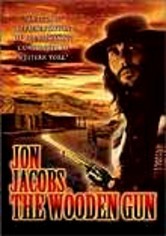 2001 NR 1h 30m DVD
Wily gunslinger Jake Finney (Jon Jacobs) is being transported to the site of his execution but pulls off an improbable escape using a wooden gun he carved, also freeing a fellow outlaw (Michael Kastenbaum) bound for the gallows. With the sheriff (Stephen Polk) hot on their trail, the men make a mad dash for the U.S.-Canadian border. Stars Jacobs and Kastenbaum also direct this indie Western filmed in black and white