The Woods Have Eyes 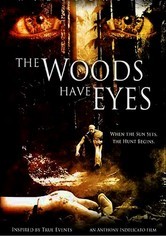 The Woods Have Eyes

2007 NR 1h 27m Blu-ray / DVD
What begins as a silly prank ends in a quest for survival as a group of young campers crosses a forbidden river in the backwoods of New York and finds out the hard way that the tales of a twisted urban legend are frighteningly real. Co-written and directed by Anthony Indelicato, this low-budget but effective thriller stars Joseph Anthony, Michael Bolten, A.J. Diaferio, Cody Greer, Garrett Harrison, Taylor Jeffers and John Kyle.