The Work and the Story 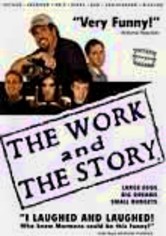 The Work and the Story

2003 NR 1h 17m DVD
Richard Dutcher, who founded who founded the Church of Latter Day Saints Cinema, is missing and may be dead. Who will take his place? Egomaniacal filmmaker Peter Beuhmann (Nathan Smith Jones, who also directs) is determined to be crowned the next "Mormon Spielberg." But he faces stiff competition from other wanna-bes, including Judy (Jen Hoskins), a filmmaker and housewife whose biblical epics are distinguished only by their bad choreography.