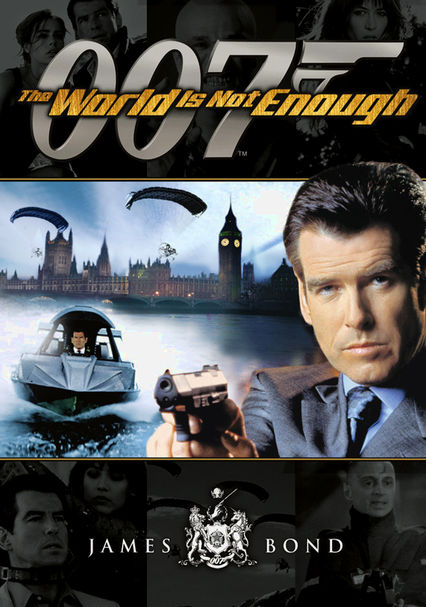 1999 PG-13 2h 8m Blu-ray / DVD
Greed, revenge, world domination, high-tech terrorism: It's all in a day's work for cunning secret agent James Bond, who's on a mission -- and in a race against time -- to protect a beautiful oil heiress from a notorious terrorist.

Parents need to know that The World Is Not Enough is the 19th official James Bond movie, and the third with Pierce Brosnan. It contains the usual amount of shooting, chasing, explosions, and killing. One minor character commits suicide, and Bond is tortured in a sadistic chair that chokes its occupant. Bond seduces three women during the course of the movie. No nudity is shown, though we see kissing, bras and panties, and some skin. One of Bond's partners has a second partner of her own. There is some blatant sexual innuendo. Bond drinks in a few scenes, including a whiskey and a vodka martini. Language is mild, with "ass" and "hell" used. Bond uses a VISA card to open a door and drives a BMW; these are paid product placements. It's largely considered one of the weaker Bond movies, but it still has a lot of silly energy, and Bond fans young and old will definitely want to see it.

Bond seduces three women over the course of the movie. The first is a female doctor in order to pass his physical. He goes to bed with Elektra (with kissing). Bond and Christmas have implied sex with nothing shown (and a strongly suggestive pun on her name). Elektra also has a second lover: she is seen in bed with Renard; no clothes, but nothing sensitive shown (also with kissing). In general, there's innuendo, and flirting, as well as the sexy, naked-looking silhouettes during opening titles. In one scene, Bond looks at two women through "X-ray glasses," and we see guns hidden under their clothes, plus bras and panties, but no nudity.

This movie features the usual shooting, stabbing, chases, explosions, with characters dying and one minor character committing suicide, with very little blood shown. The bad guy is said to have a bullet in his brain that affects his nerve endings; he can't feel pain. Bond is tortured, increasingly choked by a metal strip, in a sadistic chair made for that purpose. M is kidnapped and held prisoner, Bond is chased with a helicopter tree trimmer, and there's a fight aboard a submarine with a nuclear reactor. Bond shoots a woman and shows remorse.

James Bond is technically a good guy, but he destroys property, kills people, drinks alcohol, and seduces several women. In this movie, he appears to be upset about killing one particular character, but otherwise, he never really learns any lessons or changes over the course of the story.

Bond uses a VISA card to open a door; VISA paid for the product placement. Bond's car is shown to be a BMW.

Bond casually drinks a whiskey with ice in M's office, and a vodka martini at party.