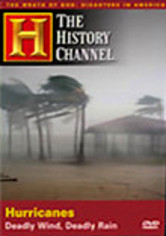 2005 NR 0h 50m DVD
This riveting documentary reveals how scientists have made great strides in understanding and predicting hurricanes in the 20th century. But as the population in America's coastal areas increases, the threat that these storms represent remains huge. Three powerful tempests are profiled here, including the "big one" in Miami in 1926, the New England Hurricane of 1938 and Hurricane Andrew, which struck Florida in 1992.