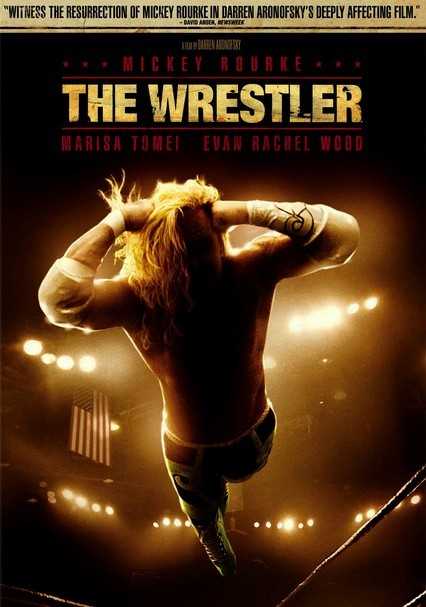 2008 R 1h 45m Blu-ray / DVD
Mickey Rourke stars as retired professional wrestler Randy "The Ram" Robinson, who returns to the ring to work his way up the circuit for a final shot at defeating his longtime rival. Along the way, he tries to reconnect with his estranged daughter.

Parents need to know that this critically acclaimed indie drama is a strong, brilliant, fierce film -- for adults only. The acting, direction, and writing are of Oscar caliber, but there's extensive nudity, unflinching violence, drinking, drug use/abuse, and swearing. The film is also moody and complex, depicting the physical and moral consequences of the characters' work as "professionals" in the economy of entertainment.

Extensive female full-frontal nudity, with many scenes set at a strip club; the club is presented in a fiercely realistic way, without much glamor or gloss. There's a sex scene between two consenting adults who are under the influence of drugs. Male buttocks are seen as a character injects steroids.

Repeated, extensive and graphic "fake" wrestling action violence, which nonetheless involves real pain and blood. Characters use concealed razors to create bloody wounds for show in the ring; a lead character is battered, pummelled, slapped, struck with furniture, beaten with a window, and even assaulted with a staple gun (with staples punched into his flesh) in the ring. The lead character also inflicts abuse on others in the ring, striking an opponent with a table, a crutch wrapped with barbed wire, and more. The consequences of this violence are depicted in extensive detail, in terms of both long-term physical trauma and immediate suffering. Some fighting and scuffling outside of the ring. A character suffers a heart attack and must have a bypass; surgical scars are seen. A character rams his thumb into a meat slicer.

The movie thematically looks at the appeal of wrestling and violent entertainment, as well as adult "entertainment" like stripping.

Some brands are visible or mentioned on screen, including Nintendo, Call of Duty 4, Polaroid, bands like RATT and Poison, and more. Some real-world brands are briefly glimpsed in a grocery store.

Characters smoke, drink beer and hard liquor, and abuse drugs like cocaine and steroids, as well as painkillers. References to marijuana and amphetamines; prescription drug abuse. There are clear negative health effects from the main character's misuse of alcohol, steroids, and other drugs.