The Wubbulous World of Dr. Seuss: The Cat's Family and Friends 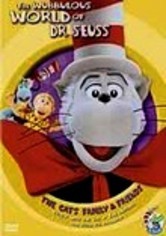 The Wubbulous World of Dr. Seuss: The Cat's Family and Friends

2007 NR 1h 13m DVD
Can you help track down the missing Snoozer Statue? Would you like to meet the Queen of Ka-Larry? How about learning to speak the language of Fleep? Join the clever Cat in the Hat, his silly friends and funny family as they embark on another adventure of exploration and learning. This episode from the Emmy-nominated television series features a creative combination of computer animation and Jim Henson puppetry that's sure to engage children.