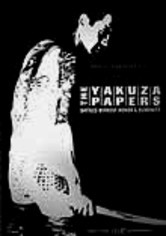 1973 NR 5 discs
Based on an actual crime boss's life story, the plot of this drama follows former soldier Shozo Hirono (Bunta Sugawara), who's joined a Yakuza gang in Hiroshima. Shozo must endure jail time and is forced to kill off rival gang members in his quest to be accepted. This post-World War II series of films from director Kinji Fukasaku seeks to change the cinematic perception that organized crime is a glamorous, lucrative business.