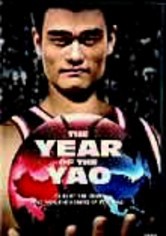 2004 NR 1h 28m DVD
This absorbing documentary tracks the rookie year of Ming Yao -- who's become one of the leading centers in the National Basketball Association -- from the first ball toss to the final whistle of the last game of the season. Even in a sport crowded with hulking giants, Ming stands tall at 7 feet, 5 inches high and is fast becoming a legend in Houston, where he's based with the Rockets, and in his native China.

Parents need to know that this documentary focuses on the super-popular basketball player Yao Ming, whose initial acclimation into U.S. culture involves getting used to a new language, new habits, and new expectations. Many kids will be interested in his story, partly because the marketing machine this film exposes is so successful (Yao jerseys, posters, and other merchandise are everywhere). Families should be aware that the film's premise is Yao's integration into U.S. commercial culture: he becomes a kind of brand himself, as he sells Apple computers or soft drinks. It doesn't hurt that Yao is a great salesman, a good sport, and a loyal son to his parents, who come with him to live in Houston during his first year. There is mild profanity (from Yao's teammates), and the game scenes can be intense (only as professional basketball involves some aggression and body contact).

Basketball scenes include some aggressive play.

The film is partly about Yao becoming a brand name.