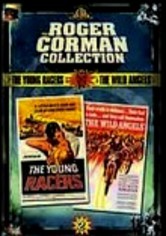 1963 NR 2h 47m DVD
Roger Corman directs this pair of high-octane dramas. Featuring plenty of action on real Grand Prix racetracks, The Young Racers tells a tale of fast cars and faster lifestyles as a jilted boyfriend and former racer decides to expose a womanizing driver. Then, Peter Fonda, Bruce Dern, Diane Ladd and Nancy Sinatra star in The Wild Angels, a story of gritty bikers who rescue an injured pal from the hospital after he steals a cop's motorcycle.