The Zombies: Live at the Bloomsbury Theatre, London 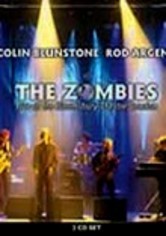 The Zombies: Live at the Bloomsbury Theatre, London

2004 NR 1h 30m DVD
For the first time in more than 30 years, founding fathers Colin Blunstone and Rod Argent come together on stage for this Zombies reunion concert. Filmed at London's Bloomsbury Theatre, the concert captures the legendary rockers performing songs from their 2004 album, "As Far As I Can See," as well as classic hits. Songs include "This Will Be Our Year," "A Rose for Emily," "Beechwood Park," "Time of the Season," "Mystified" and many more.