The von Trapp Family: A Life of Music 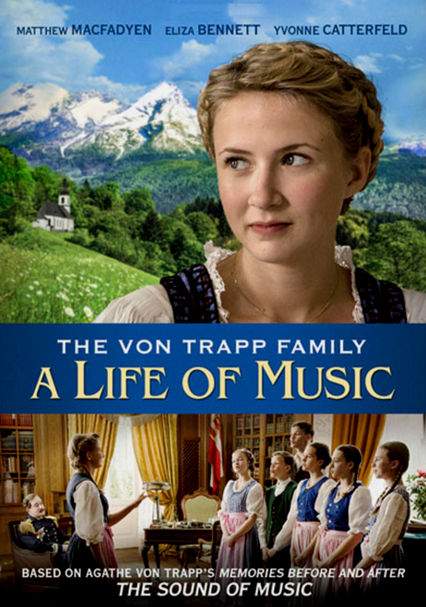 The von Trapp Family: A Life of Music

2015 NR 1h 38m DVD
After achieving widespread fame as part of the musical von Trapp family, eldest daughter Agathe went on to live a colorful and challenging life, as recounted in this dramatic biography of a gifted and independent-minded woman.

Parents need to know that The Von Trapp Family: A Life of Music recreates the story so beautifully told in The Sound of Music: A talented, reconstituted family struggles with surging Nazism in Austria in the late 1930s. This movie is based on the book Memories Before and After The Sound of Music, an autobiography by the oldest Von Trapp daughter, Agathe (called Liesl in the classic musical). Though there is music -- the children singing together, their first performances, some solo selections -- the film is a drama. Early scenes depict events and emotions surrounding the death of Captain Von Trapp's wife, the mother of Agathe and six other children. Sequences set during the German-Austrian "unification" are suspenseful, and, in one instance, Agathe witnesses a brutal attack. Still, it's the same uplifting, heartfelt story with a few significant changes that come from the book.

A young man is chased and brutally beaten by a gang of thugs. Family is threatened by Nazis; suspenseful efforts to avoid capture.

Underscores value of courage in the face of repression; encourages standing up for what's right. Looks at challenges of family after death of loved one; promotes acceptance of changing circumstances.

A villain pours himself a drink. Several characters smoke.