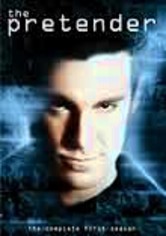 1996 NR 7 discs
Child prodigy Jarod Russell was kidnapped and raised at a facility called "The Centre," where he was trained to assume the identities of doctors, lawyers and police officers -- anyone that was required. Over time, however, Jarod discovered that his chameleon-like impersonations were not always being used for good, so he left. Now, the grown-up Jarod (Michael T. Weiss) searches for his parents while using his talents to help those in need.