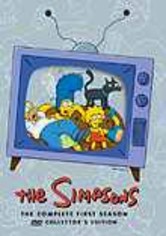 1989 NR 3 discs
One of the smartest and consistently funny cartoons ever is also the longest-running prime-time sitcom. Laugh and wince as the Simpson family stumbles through middle-class escapades in the first season of what would become a cultural phenomenon. Whipping out humor from satire to slapstick, the program presents memorable gags and one-liners as Homer, Marge, Bart, Lisa, Maggie -- and the entire Springfield community -- take on a life of their own.

Parents need to know that the jokes in the long-running The Simpsons often zip past so quickly that kids won't get the deeper statements hidden within. Life in Springfield can be chaotic, and Homer could very well be the "do not try this at home" poster boy. You'll hear frequent "hell" and "damn," usually uttered by Bart. Homer frequently chokes Bart, but it's played for laughs. Religion, morality, ethics, and other sacred cows are mocked. Halloween specials are particularly violent, with characters killing each other in gruesome ways that may disturb young or sensitive viewers. Characters sometimes ingest food or drink that brings on psychedelic trips. Naked rear ends (animated) are sometimes visible, and sex is the subject of jokes (which kids may not get). Beer is consumed in every episode, bad habits are obliged, and ignorance and mockery are the norm, but somehow everyone gets along in the end.

Innuendo-based humor is pretty frequent. Both subtle and not-so-subtle sexual references pop up. Women can be dressed like vamps.

Frequent slapstick and cartoon violence: car crashes, explosions, practical jokes, bullies beating up weaker kids. Characters are rarely injured, but on occasion, some do die and/or require treatment. Halloween specials are particularly violent, with disembodied limbs and heads, blood, and gore. Homer frequently chokes Bart; it's played as a joke.

Language includes words such as "hell," "ass," and "damn." Bart is usually the main offender, though Grandpa Simpson is a dirty dog as well.

Although much of the show's satirical, over-the-top humor can be construed as sending messages about irresponsibility, family dysfunction, and more, at their core the Simpson clan are a loving bunch who are always there for each other when the chips are down. Homer and Bart in particular are constantly challenged to "behave," and though they don't always fully succeed, they often learn lessons about self-control and caring for others.

Homer often drinks beer to excess. Characters are shown getting pass-out drunk, and many scenes are set in a bar. It's often implied that bus driver Otto gets high. In several instances characters ingest mysterious liquids or foods that send them on psychedelic trips.