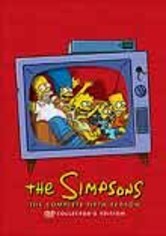 1993 NR 4 discs
Five years into its successful run, "The Simpsons" had already established itself as one of television's biggest hits, consistently turning in edgy and witty episodes not previously associated with an animated series. Rediscover the magic and genius of the show's 1993-1994 run, which has Homer, Marge, Bart, Lisa, Maggie and the rest of the gang dishing out even more hilarious hijinks. Guests include George Harrison, James Woods and The Ramones.