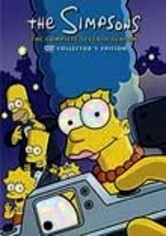 1995 NR 4 discs
Mr. Burns identifies his would-be assassin in the conclusion of "Who Shot Mr. Burns?,"which is just one of many classic episodes in this stellar seventh season of the long-running hit animated series. The laughs are plentiful this season with Homer's work-at-home weight gain scheme, Lisa's determination to shed her nerdy image, a best-of episode and Bart's Dennis the Menace-style attack on his new neighbor, former president George Bush.