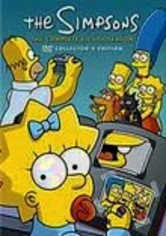 1996 NR 4 discs
Springfield's favorite family roars into its eighth season in this collection. Highlights include Rodney Dangerfield as Mr. Burns's son in "Burns, Baby Burns" and Johnny Cash as a coyote spirit in "El Viaje Misterioso de Nuestro Jomer." Also included is "The X Files" stars Gillian Anderson and David Duchovny as Scully and Mulder in "The Springfield Files." Series creator Matt Groening, as well as other writers and cast, sound off on the commentary tracks.