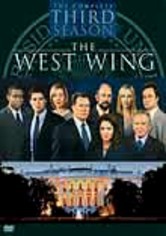 2001 NR 6 discs
The third season of Aaron Sorkin's political drama opens as President Bartlet kicks off his campaign for re-election. Meanwhile, C.J. is plagued by a stalker and the president must deal with the fallout of revealing his illness to the nation.