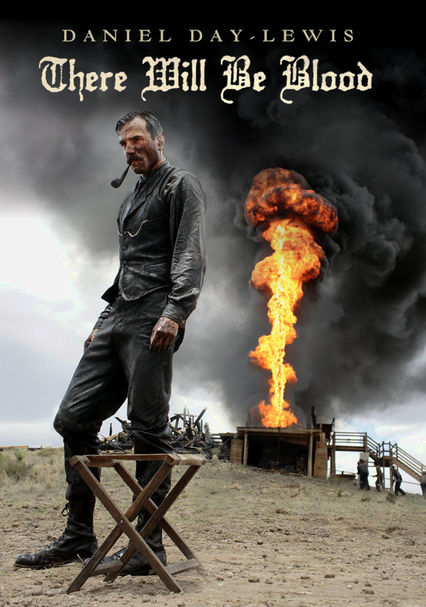 2007 R 2h 38m Blu-ray / DVD
In this expansive drama, ambitious prospector Daniel Plainview strikes it rich when he buys the oil rights to a California family's ranch. As he turns a simple village into a boomtown, Plainview stokes the ire of a charismatic young preacher.

Parents need to know that most teens probably won't be clamoring to see this slow-moving, somber drama about mature, sometimes abstract themes like capitalism and religion as driving forces in 19th- and early 20th-century America. Violence includes mining and oil well accidents (explosions, flames, a couple of deaths), several fights (hitting and kicking), and a shooting (abrupt and disturbing). The blood referenced in the title comes at the end of the movie, during a protracted, brutal struggle. Some drinking and smoking; language includes "hell" and damn."

Daniel and Henry visit a brothel -- kissing couples appear in the background.

Early on, Daniel is injured in a mining accident (his leg is pierced by a tool, and there's some blood). Several oil drilling accidents, a couple with explosions and flames; two accidents kill workers (brief explosions, bodies shown) and one injures a young boy (his body is slammed and unconscious, and he's left deaf). An angry Daniel slaps and hits H.W. Eli attacks his father, trying to strangle him. Daniel attacks Eli, kicking and hitting him, dragging him into an oil pool. Murder committed by gunfire (no blood visible). Eli slaps Daniel hard and repeatedly during a baptism. A brutal, bloody murder is committed at the film's end.

Daniel, the designated "capitalist," is a greedy, calculating man whose disdain for others only grows more pronounced as the film proceeds; the "man of god" is also conniving and power-mad; at last, Daniel's son breaks away, though he does so by competing with his father in business, exactly what his father hates most.

Some thematic commercialism -- the film follows the building of an oil empire.

Daniel quiets infant H.W. by pouring whiskey into his bottle and, years later, gives him whiskey to make him sleep. Daniel drinks repeatedly, several times to the point of passing out; Henry drinks a few times as well. Daniel smokes cigarettes and a pipe, as do his right-hand man and several background characters.