They Made Me a Killer 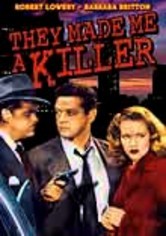 They Made Me a Killer

1946 NR 1h 4m DVD
Two strangers pair up to catch a killer in this crime drama. The sole witness to a bank robbery involving a murder, Tom Durling (Robert Lowery) becomes suspect No. 1. Tom hides out from police, but he's also hunted by a woman named June (Barbara Britton), whose brother was killed in the holdup and believed complicit in the crime. Desperate to clear her brother's name, June joins with Tom, and together, they set out to nab the real crooks.