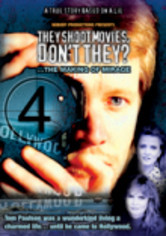 2000 NR 1h 27m DVD
Director Frank Gallagher's absorbing pseudo-documentary follows young Tom Paulson (Tom Wilson), who turns to filmmaking when a knee injury ends his promising baseball career. After three frustrating years in Tinseltown's studio system, he strikes out on his own to produce an indie feature. But the distributor pulls the plug at the eleventh hour, leaving the distraught Paulson $80,00 short -- and ready to take drastic measures to finish his movie.