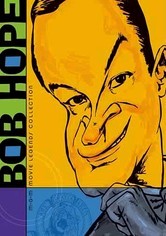 1943 NR 1h 35m DVD
When a hapless reporter (Bob Hope) uncovers a Nazi spy ring operating in the nation's capital, he enlists the help of his girlfriend (Dorothy Lamour) to help him crack the story. But the hilarious mayhem he unleashes is more than he bargained for. Together, can they break the story, win back their professional credibility and escape with their lives? Directed by David Butler, this classic comedy also features Otto Preminger and Philip Ahn.