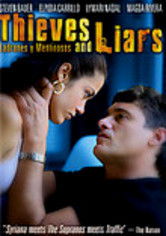 2006 R 1h 52m DVD
This Spanish-language film in the vein of Traffic takes a dramatic look at Puerto Rico's role as a go-between in the drug trade between the Third World and the United States -- and the corruption and socioeconomic implications that go along with it. The interwoven plot lines follow different characters, from a teenage drug addict to brothers who support their grandmother by running drugs to a single mother who's falsely implicated in a drug ring.