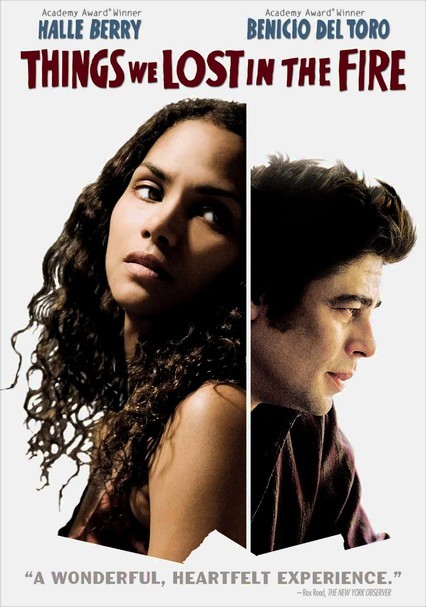 2007 R 1h 59m Blu-ray / DVD
Attempting to piece her life back together after losing her husband in a tragic incident, grieving widow Audrey turns to an unlikely ally: her husband's childhood friend Jerry, an emotionally wrecked heroin addict.

Parents need to know that this emotional drama isn't likely to appeal to kids or teens. The director is Danish and relatively unknown to American audiences, and despite Halle Berry's popularity, the trailer and ads clearly highlight the mature dramatic themes -- which include death, murder, drug addiction, and grief. Several scenes show Benicio Del Toro's character doing (or already high on) heroin and Berry's widowed character sobbing. The language is strong (and includes "f--k," "s--t," and more), but it's not excessive, particularly taken in the context of the movie's powerful emotions.

Audrey and Brian kiss, fool around, and embrace in bed before going to sleep.

Disturbing scenes of junkies getting high and a very upsetting double-murder suicide. Audrey pushes and pounds on Jerry in anger.

Brian remains a loyal friend to Jerry, even though he's a drug addict. He also intervenes in a domestic abuse situation. Audrey and her family and friends help Jerry get clean after Brian's death.

Several scenes show Jerry getting high and strung out on heroin. Other drug addicts also shown.