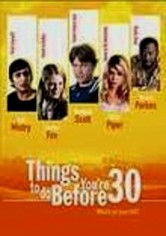 2004 NR 1h 38m DVD
This poignant British comedy follows six friends who've played on the same London football team since they were children. And although they've known each other for 20 years, the complex issues they now face in adulthood -- including romantic woes, coming out of the closet and dealing with death -- test their close bonds. The smart and sexy film stars a host of up-and-coming British talent, including Dougray Scott, Emilia Fox and Jimi Mistry.