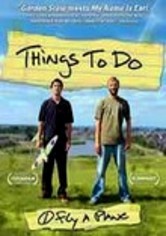 2006 NR 1h 25m DVD
Office drone Adam (Michael Stasko) quits his job and flees to the calm retreat of his parents' home. There, he runs into an old acquaintance named Mac (Daniel Wilson), and a new adventure ensues: The duo sets out to complete a "Things to Do" list, a compendium of strange and unfinished business left over from adolescence. This comic indie charmer was an official selection at the Slamdance Film Festival.