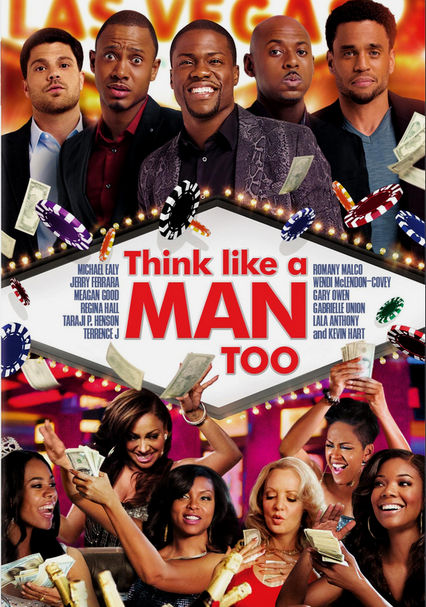 2014 PG-13 1h 46m Blu-ray / DVD
All the couples are back for a wedding in Las Vegas, but plans for a romantic weekend go awry when their various misadventures get them into some compromising situations that threaten to derail the big event.

Parents need to know that Think Like a Man Too is the sequel to 2012's popular relationship comedy Think Like a Man, and, like the original, it has enough sexual humor and content (foreplay, kissing, role playing, skimpy outfits) to make it an iffy choice for younger or immature teens. But for older teens and adults, it's actually a very pro-monogamy, pro-marriage comedy that focuses on what's important in a healthy relationship: honesty and communication. There's a good bit of strong language ("a--hole," "s--t," "p---y") as well as alcohol use and an accidental pot-fueled bachelorette party (the marijuana is in what looks like breath mints). Given the subject matter and the '90s references and cameos, this movie is likely to be more fun for Gen-X adults than teens.

As in the first film, there are lots of references to sex (though this time they're regarding monogamous couples, rather than folks who are casually dating or hooking up). Couples are shown in the act of foreplay, kissing in bed, and just after sex, but there are no lingering sex scenes. Nearly every couple in the movie is shown about to have or just having had sex, including one Game of Thrones-themed "role playing" sequence. Some bare backs/cleavage and scantily clad folks in strip clubs.

A fist fight breaks out among the friends, and there's a pretty long brawl in a strip club that leads to multiple arrests.

Several positive messages for couples about the importance of honesty and communication in a relationship. One couple's differences revolve around an overbearing mother-in-law, but the couple shows that you need to honor your parents even as you stand up for your current or future spouse. Each couple's relationship has a different "message," but they're all positive.

Lots of social drinking in the nighttime scenes in Vegas, particularly at the bachelor and bachelorette parties. Jeremy is known for being a pot head, and his stash of edible marijuana is accidentally consumed by all of the women except for one.