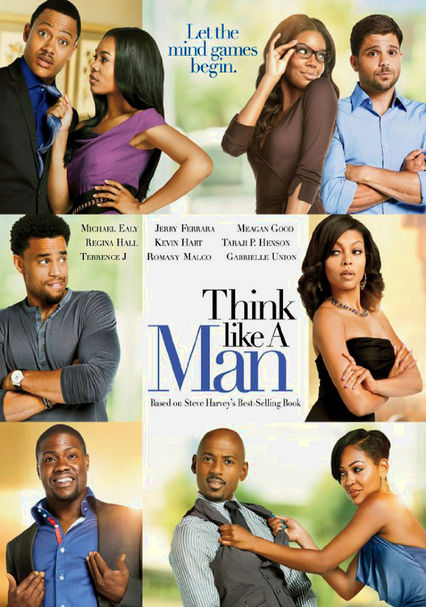 2012 PG-13 2h 2m Blu-ray / DVD
Armed with advice from Steve Harvey's best-selling book, four frustrated women set out to solve their relationship problems. But the tables are turned when the men in their lives get wise.

Parents need to know that Think Like a Man has enough sex and relationship content to make it an iffy choice for immature young teens. And it's not just the passionate kissing and love scenes (men are shown bare chested, women stripping down to their bras and panties) that might be too much for some viewers -- there's also a lot of language (mostly "s--t," "a--hole," "bitch") and alcohol use, as well as some pot smoking. But for older teens who are ready to start thinking about romance, the movie does pose some thought-provoking (albeit a bit cliched) ideas about how different types of people approach meaningful relationships.

It's not surprising that a movie about relationships mentions sex (or its many euphemisms) a lot and has several love scenes and making-out shots -- mostly between couples who've recently begun dating. Shirtless men, women in bras and panties or bare-shouldered and legged are regularly shown. In one of the earliest scenes, a shirtless man in bed flees a woman's house after a one-night stand. One guy who's known for womanizing is considered a "player." Mya refuses to have sex for at least 90 days/until her boyfriend says "I love you." Another couple has sex on their first date and then is shown in bed a few more times.

On the one hand, there's a positive message for young women that they don't have to accept a relationship the way it is and have the power to set higher standards for themselves and their partners. But there's no foolproof "formula" for a good relationship, and the advice differs for each couple, leading to so much advice that it could easily overwhelm a teenager new to romantic relationships.

Think Like a Man is in many ways a two-hour commercial for Steve Harvey's book on men and women, especially the first half, when Harvey himself appears many times explaining his various themes and philosophies on relationships. There are also close-ups of three different Mercedes Benz cars, and a Barnes and Noble features prominently in a book-buying sequence. During the basketball games, the guys wear a lot of Nike.

Since most of Think Like a Man takes place at bars or restaurants, there's nearly constant social drinking -- wine, beer, hard liquor, shots, you name it. Jeremy is known for being a pot head, and he and Kristen smoke marijuana once.