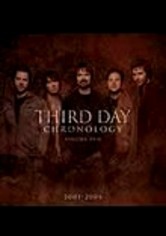 2007 NR 1h 0m DVD
Christian rock band Third Day returns for a second scrapbook filled with fan-made and bootlegged concert footage, music videos and interviews spanning 2001-06. The band discusses their music and their mission between tracks. Performances include "Come Together," "What I'm Living For," "Nothing Compares" and "Sky Falls Down." A video diary of drummer David Carr's trip to Alaska and an acoustic set from Tulsa, Okla., are also included.