Third Day: Live in Concert: The Come Together Tour 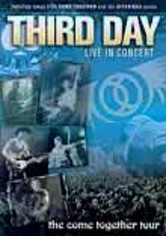 Third Day: Live in Concert: The Come Together Tour

2003 NR 1h 35m DVD
Grammy-nominated gospel singers Third Day are captured live in concert, performing material primarily based on their 2001 "Come Together" album. Playing at sold-out arenas across America, Third Day has amassed a solid base of fans that will be delighted by the behind-the-scenes look at the band featured here. The tracks, the inspirational performances … everything magically comes together on this great disc.