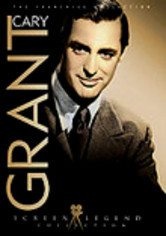 1934 NR 1h 32m DVD
Appearances are everything -- or at least they seem to be -- in this pair of early Cary Grant outings: Thirty Day Princess, in which Sylvia Sidney plays a dual role; and Kiss and Make Up, in which Grant plays a plastic surgeon. In the first film, Grant is a newspaper publisher who falls for an American actress impersonating an ailing foreign royal. In the second, Dr. Lamar unwittingly turns a client into a monster by making her too beautiful.