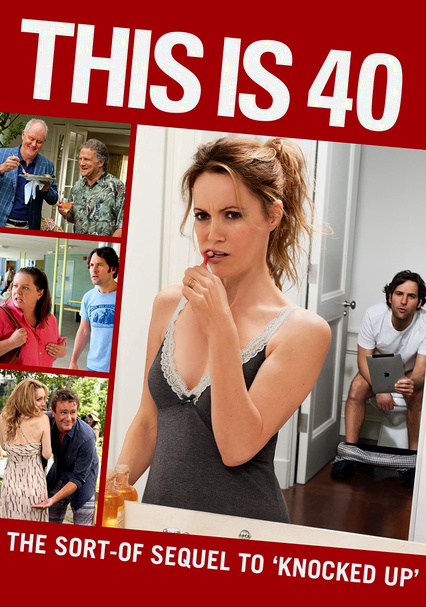 Parents need to know that This Is 40 is a sort-of sequel to Judd Apatow's popular comedy Knocked Up, following that movie's supporting characters, Debbie (Leslie Mann) and Pete (Paul Rudd), as they hit mid-life and start taking their marriage, and each other, for granted. It's classic Apatow, combining raunchy humor with tender moments, sometimes in the same scene, in ways that seem both realistic and entertaining. There are lots of sexual references and some intimate moments (though not much actual nudity beyond a woman's breasts), suggested oral sex, graphic bathroom humor, a scene of adults getting very high on pot cookies, other drinking/smoking, kids and teenagers misbehaving, and tons of strong language ("f--k," "s--t," and much more).

Lots of sexual references, and two scenes featuring a married couple in intimate moments, including a spontaneous episode of oral sex that shows a woman's head moving up and down. A wife propositions her husband (her breasts are shown) in a scene that's anything but intimate. Other scenes show a woman in her underwear for no specific reason. A married couple watches a young woman have enthusiastic sex from a webcam when she doesn't know she's being watched. Another scene shows one female character poking at another's breasts with admiration. A character admits to being a professional escort. A breast is shown when a character gets a mammogram.

Several heated fights -- between a long-married couple, between parents and children, and between a frustrated boss and his employees. Two men get into a fist fight that leaves one rolling on the ground in pain.

This Is 40 takes the position that marriage is hard, and people will irritate each other no matter how strong a connection they may have. But being able to ignore the small stuff and work together on the big things, even when you might think your partner is acting ridiculous, is the key to making a relationship last for the long haul.

Many Apple products are featured prominently, especially a frequently used iPad. Several characters wear Nike sportswear. Characters also name-check well-known brands, including Facebook and the TV show Glee. The series Lost plays an important role in the plot and is mentioned repeatedly. Many musicians are also mentioned by name, and a few appear in the film.

An adult couple gets very high on pot cookies and acts ridiculous. A woman is trying to give up cigarettes but often smokes them secretly. People drink beer and other drinks at bars and parties.