This is Coronation Street: The Anniversary Special 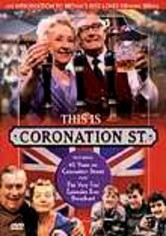 This is Coronation Street: The Anniversary Special

2000 NR 1h 15m DVD
"Coronation Street," the continuing drama about ordinary people living on a gritty street in northern England, is the longest-running drama in the world and a national treasure in Britain. This video contains the show's 40th Anniversary special, which includes rarely seen archival footage and interviews with cast members past and present. The special also features British celebrities talking about what the series has meant to them.