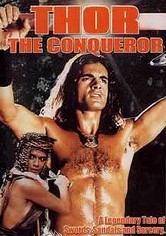 1983 R 1h 31m DVD
In this tale taken from Nordic mythology, Thor (Conrad Nichols) -- whose parents are slain at his birth -- is raised in hiding by the birdman Etna (Christopher Holm), only to return to his homeland years later to avenge the death of his family. With the warrior virgin Ina (Maria Romano) at his side, Thor goes to battle with the murderous Gnut (Raf Falcone), his father's archrival and slayer.