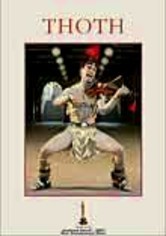 2002 NR 0h 40m DVD
This Academy Award-winning documentary introduced the world to an enigmatic outcast who goes by the name of Thoth, the product of a Jewish father and an African-American mother who inhabits Central Park's Bethesda Fountain clad in a gold loincloth performing "soloperas." As the one and only resident of a mythical land he calls Felstad, he lives in relative peace and harmony despite the odd stares he gets from passersby.