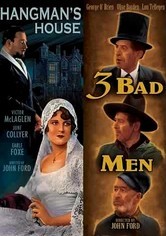 1926 NR 2h 43m DVD
In Three Bad Men -- one-half of this silent double feature from John Ford -- three outlaws take a young woman under their care when her father is killed. Then, in Hangman's House, a dying judge hopes to arrange his daughter's marriage. The girl has no interest in the wealthy but despicable John D'arcy (Earle Foxe), who may have driven another woman to suicide. The plot thickens when the dead woman's brother returns home planning revenge.