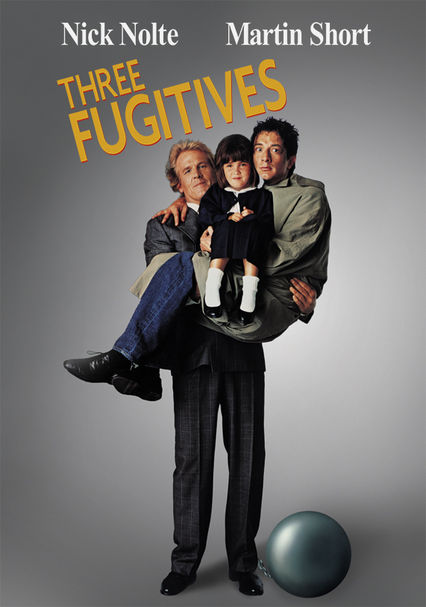 1989 PG-13 1h 36m DVD
Fresh out of prison, former stickup man Daniel Lucas (Nick Nolte) finds himself taken hostage at a bank by would-be robber Ned Perry (Martin Short), and the cops -- aware of Lucas's history -- naturally assume the two are a team. Before you can say "getaway," Lucas and Perry are on the run with Perry's 6-year-old daughter (Sarah Rowland Doroff) along for the ride in director Francis Veber's fast-paced remake of his French crime caper.

Parents need to know that Three Fugitives is a 1989 action comedy starring Nick Nolte and Martin Short as a mismatched pair on the run from the police after a botched armed robbery and a case of mistaken identity. It's a 1980s movie formula -- two opposite characters that must work together -- that hasn't aged well, and the attempts at comedy frequently fall flat. There is frequent profanity -- Nolte's character has nicknamed Short's character "A--hole," for instance -- and there is frequent violence in the form of guns, fistfights, and car chases. Also, a van drives through the front of a dive bar, and a little girl runs into traffic.

Frequent profanity. One of the lead characters is nicknamed "A--hole" by the other lead character. "F--king," "s--t," "bulls--t," "goddamn."

No positive messages emerge in this dark comedy.

Beer drinking in a biker bar.