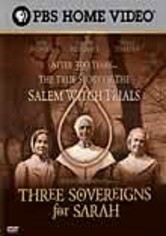 1985 NR 3h 0m DVD
During the 1692 witch hysteria in Salem, Mass., nineteen people were hanged and one man was pressed to death while hundreds of others suffered in dreadful prison cells. This PBS dramatization presents an accurate portrayal of that tumultuous time. Transcripts of the witch trials are woven into the dialogue in this powerful and moving story about three loving sisters who are accused of witchcraft.