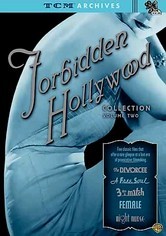 1932 NR 2h 3m DVD
Revisit the sizzle and style of pre-code Hollywood with two vintage tales featuring women who aren't content to live by the rules. The lives of three young girls take widely divergent turns until they reunite years later in the cautionary tale Three on a Match, starring Bette Davis. In Female, Ruth Chatterton plays a take-charge auto-factory manager whose predatory advances toward her male employees are rebuffed by inventor George Brent.