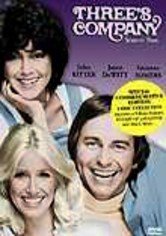 1977 NR 4 discs
Slapstick and sexual innuendo abound in the second season of the wildly successful sitcom when Jack gets hired as a male model and learns he's expected to pose nude. Later, the roommates stumble upon some marijuana plants in the Ropers' garden.